Busy, busy, like a queen honeybee, pumping out ideas, designs, and information with little breaks in between to breathe. Ask for help will I? Why? Everything’s under control, yep…everything is errythang.

Whew. Who am I kidding??

These last two years, I had been producing works for publication and sale. After joining the band, I was compelled back into performance art. So, getting my Vaclav Havel on, I’ve designed an exhibit of empowered, proactive women sharing words of wisdom in the form of goddesses. Fun, right? The exhibit came from a place of concern, that pit in the gut where you feel something needs to be expressed, something especially important for humankind. This is what Art does for us, yes? Get those expressions out into the open.

I wanted to express my disappointment in humanity, specifically, in the way women refuse to support each other when it comes to social cues and laws defining our roles in society. But I didn’t want to be a nag about it either. Instead, I took a comic view. What is it that women typically deal with that we can all agree we deserve a break from? And so, I’ve developed The Living Goddess Exhibit.

The girls are here to tell it like it is.

Me, I’m going to perform as Inanna, my all-time favorite deity. I’ve blogged about her too many times to not support my obsession. Inanna is perfect! If I lived in the time of her worship, I would be her best high priestess. Why? She does what I do all the time: explore people’s dualities. I *love* to exploit either-or people (in a gentle way) in order to get them to see the world’s challenges as not which team one prefers but rather, what the global community could embrace if they considered both options. It’s easy to follow the herd, but ultimately, someone needs to shepherd. Inanna is that deity.

More details on the exhibit to come, but know this: I am in a place of deep creativity and also of calm. Things are moving at tornado speed around me but the inner cone is silent. I’m glad I’ve gotten to a point in life where I can manage the outer and inner worlds as a whole. Wish me luck in these next coming weeks! 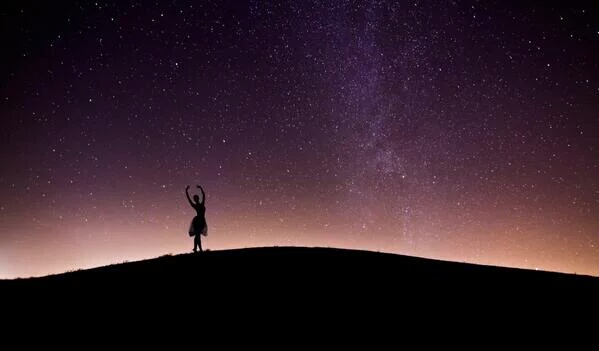 ☆ I am blissfully in love and loved in return. February 1st our two houses become one!

♡ Authenticity is the name of the game. I’ve scrapped the bent cards from my life deck. Working on solidifying my inner circle (invite only). Nice to have physical friends again.

The biggest update is:
♧ I am expanding my artistic base to dance! Pinellas County Florida is home to the Second Time Arounders Marching Band. Yours truly was a flag, sabre, and rifle-tossing member of Excalibur Color Guard in high school, and I still count those performance moments as the happiest of my turbulent childhood. So, the Universe provided me essentially a second chance at childhood – authentic, healing fun. You have no idea how great it felt to pick up a flag again!

Wanna see me in action? Check out the band’s website for the official 2016 schedule. If you’re in Tampa Bay for Gasparilla, the parade will be my 1st flag performance in 22 years! Come cheer me on!!

Here’s a 1994 video of my last winter guard performance. Look for the backboard with Cupid holding a heart; the girl with the puffy hair in set position is me…

If you’re a high-level thinking individual who’s sexy to boot, then you’re already enjoying Aeon Magazine. I appreciate their thought-provoking articles and intuitive content contributors. Recently, I beheld an interesting editorial section, Aeon Ideas, in which they posited: If you could undo one historical event, which would it be? Mr. Haselby responded with the U.S. Government response to the Elian Gonzalez affair. Good one, I thought, as US-Cuban relations are now the hot topic.

Reflecting on the past, I tried to pick an event I would undo. The Holocaust? Pol Pot? Every Kardashian?

Let me set the sad story. I moved to Texas from Germany mid-high school. Probably before the end of my first semester in America-American school I realized this country was academically slow. Wherever the America-American curriculum was set at, I’d already completed it before moving to the Western Hemisphere. 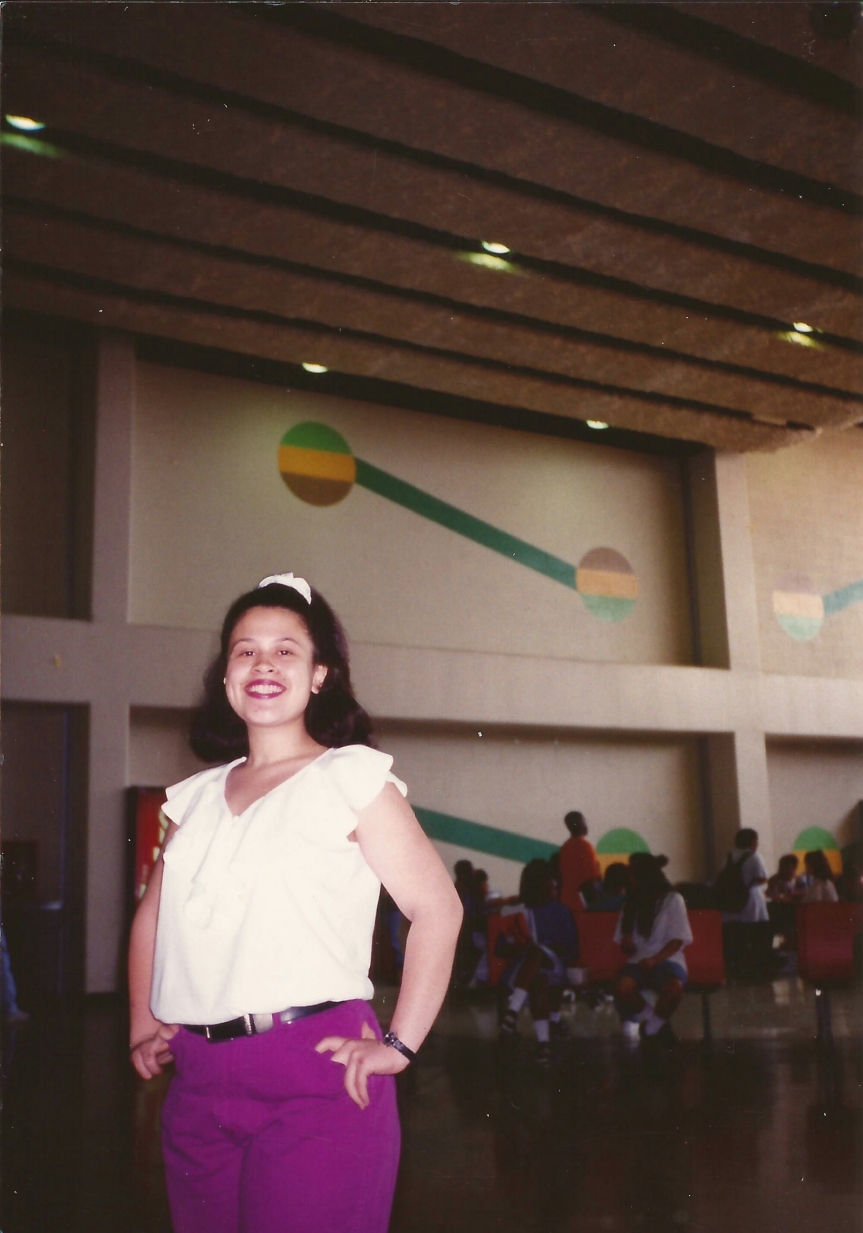 Because of this inconvenience, I would cut school, pretty regularly. Kept a decent routine; you know, be present for roll call at the beginning of 2nd period, then throw a few hand signs to a select group of people before excusing myself to the ladies’ room, winding down the stairs to the parking lot, where those who interpreted the signal correctly would be waiting to enter my family’s Ford Aerostar. Lots of coffee and pancakes at Kettle, day trips to Georgetown or Austin. We had a good time!

My first official boyfriend was not into school at all. Like this should come as a surprise to you regulars…he was quite involved in gang activity. When not day tripping to the Salado gift shoppes, I was rolling around town with this wonderful-to-me/nightmare-to-society individual. Lapses in judgment and time resulted in several Saturday detentions, which was fine, because my boyfriend would be there too! Aww, young love…

Still an Honors student, I scored high on my course exams and was ranked in the top 10% of my graduating class despite hardly entering the building (save for Band, gotta stick with Band). Used to being told to show up to the gymnasium, I trotted in one Saturday morning blissfully expecting to see BF and his gangsta cohorts. Instead, I saw kids that were in my Honors classes, looking nervous as fuck.

What happened that got all the Honors kids detention? I actually thought. I was yelled to sit down, so I did. I was handed an answer sheet and a pencil. What the…? Am I in the wrong gym?? Slapped down in front of me was the official examination handbook. SHIT.

Didn’t know, so, didn’t study! I scored a dismal 950. However, stroke of friggin’ luck…in Texas, if you are within the 90th percentile of your graduating class, your SAT scores don’t matter if you apply to a state school. Hurrah!

EXCEPT. You’re also automatically enrolled in remedial courses if you score less than average than the graduating class. Fuck fuck FUCK! 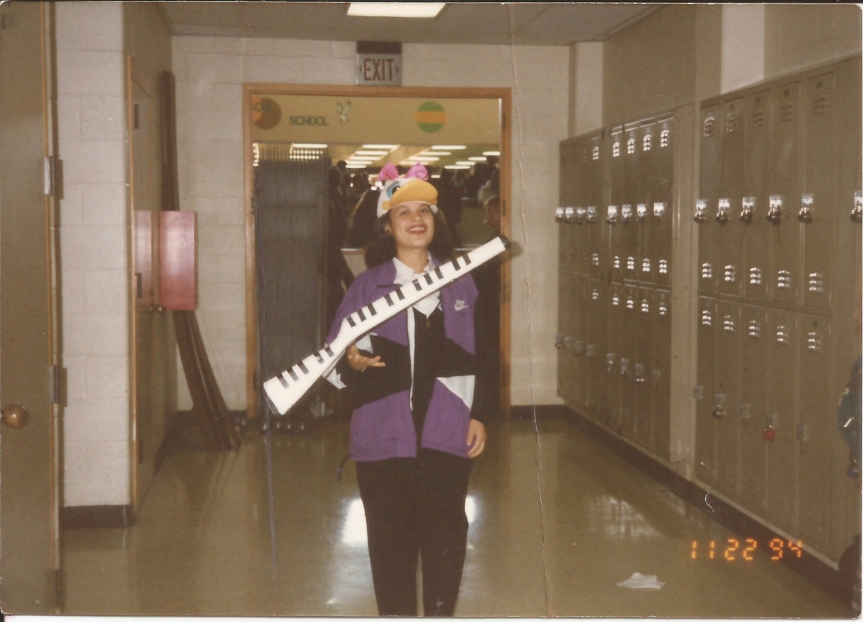 Here I am, a proficient writer in and speaker of the English language, enrolled in collegiate remedial English! Our instructor was a frail, wool-chested, chain-smoking idiot who wore his shirts unbuttoned to his naval. My first paper for the course, I misused a word: condone. To condone is to forgive or allow, I knew that, but I intended to use the word condemn, which is to judge as unfit, as I remember it was a position paper and I wasn’t agreeing with the stated position. Either way, simple mistake, especially for a handwritten, in-class assignment.

Chesty McDickerton marks my paper as a Fail. To the right margin, in creamy, red felt ink, he noted, “I understand why you made such a simple error. You haven’t mastered the English language yet.” Such gravitas!

I went from being one of the brightest and gifted students the Department of Defense Dependent Schools system has ever had the glory to educate to a fresh off the boat, English as a Second Language, special needs student in the eyes of Texas.

All because I kept skipping class. 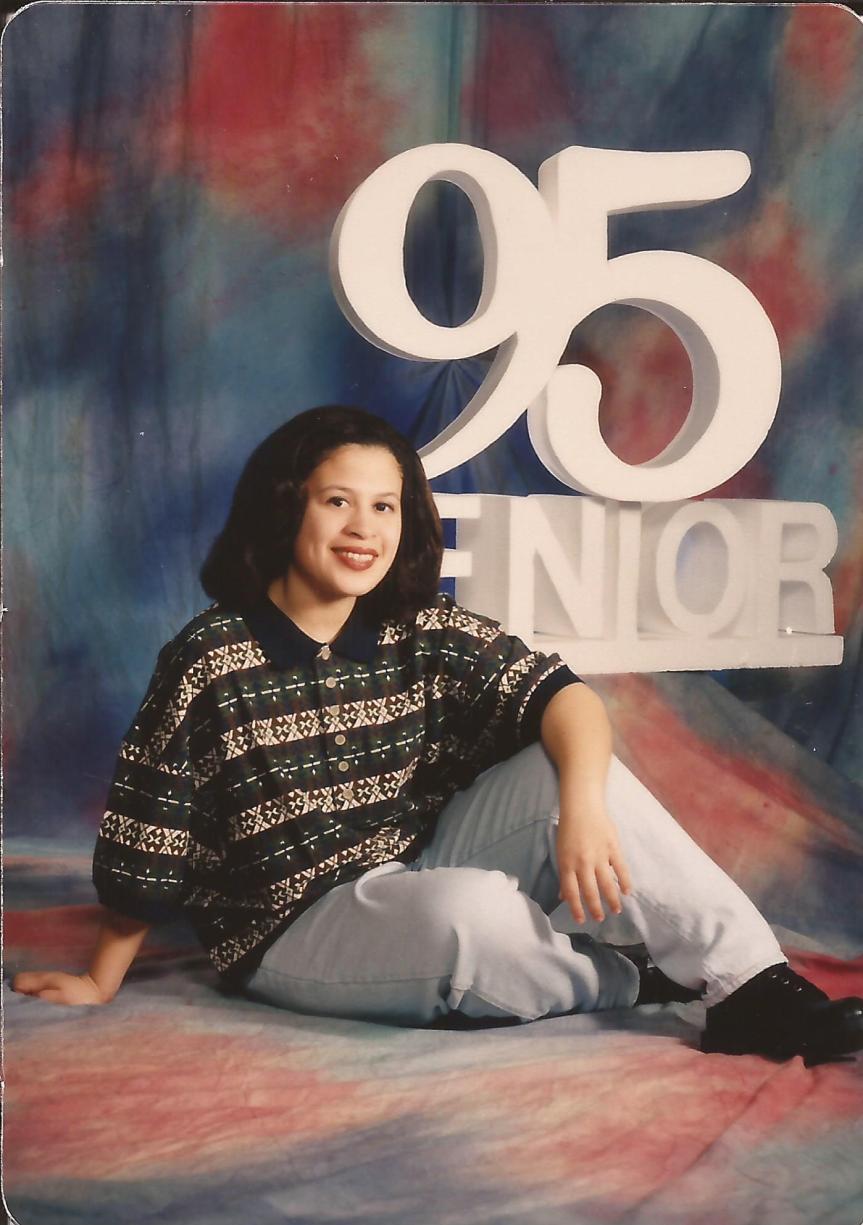 I spent the last two years of high school with this grueling schedule:

7am – 8am: color guard practice

3am – 6am: homework and maybe sleep

You can imagine how difficult it was for me to have a semblance of a balanced life then!

The nights I was not scheduled for work, I took myself to Red Team Gym, a fitness facility located on Fort Hood. This was my favorite place to pump out the stress of my so-called life.

Red Team was not the family-friendly gym; Red Team was for the serious body sculptors, the gals and guys who, after dismissed from duty, didn’t run straight to the barracks to their game consoles, but instead, to their sweats and back supports.

The gym was my happy place. Women weren’t segregated from men and everyone shared the equipment respectfully. Amongst my kindred I pressed, pushed, and howled through reps until I felt deflated, which meant, I felt good. The entire gymnasium was alive with random shouts and applause of positive affirmations. Gym rats, the lot of us, but we all felt worlds better after a challenging workout. 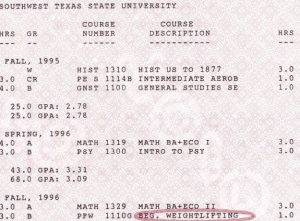 A year into university, on the first day of Weightlifting class, I simmered in quiet dismay as I absorbed my new free weight comrades: scrawny, nerdish, physically unwell, insecure. All males. No ladies. Not at all what I was used to! Guess SWTSU didn’t have any other warrior women on campus that semester?

Every class day I experienced disappointment. Since the boys wanted to keep it insular, the instructor had to force students to pair with me. The only guy who would throw just a minimal amount of shade my way had a heavy foreign accent and spoke completely indiscernible English. He also suffered from constant workout boners, and his strict adherence to tight pants certainly did not improve our partnering situation!

The scary part was pairing with someone who was so dedicated to his insecurity, he’d overload the bars. I knew deep down in my heart the weight was crippling him, but, as I’d slide my hands under the bar ready to catch, they’d scoff or tell me to back off, while their arms or legs wiggled for mercy!

Most the time, I spent Weightlifting class arms folded, waiting for my turn at the bar or bench, while the fellas chummed it up, curling Gatorade into their faces like dumb bells, using the benches as recliners, the bars as towel holders. I would’ve been completely content to work out on my own, but class rules required pairing. I left every session feeling less accomplished and more frustrated.

After making an A in the course, I invested in the campus recreational facility, abandoning the nostalgia of Red Team Gym and focusing on my health, which was and still is the priority.