My first spliff! (on the left, everyone else’s is better) 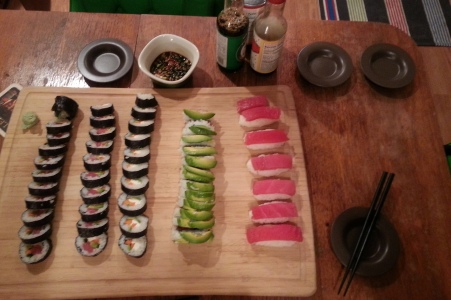 Gorgeous in design, delicious in the belly! 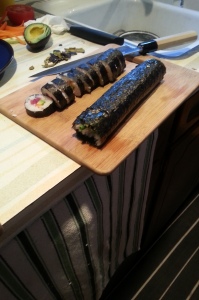 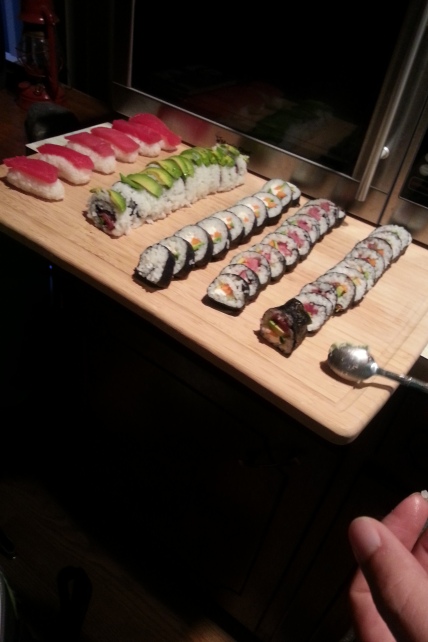 Laughed as they produced the world’s tiniest avocado. 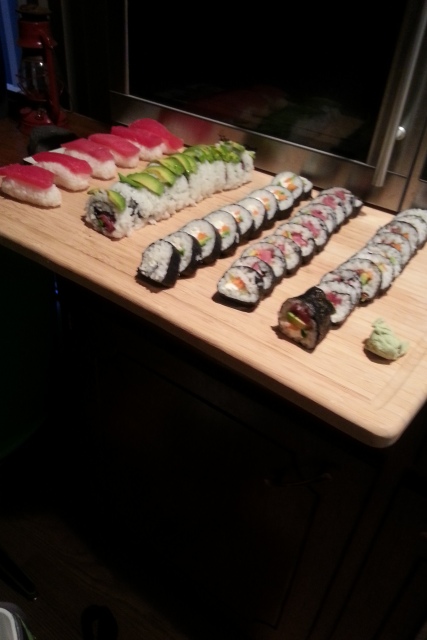 Not a bad spread for all of us first-time sushi masters.

Even though I was standing and he was sitting, Billy towered over me by another foot. Billy’s huge, like, HUGE, with a thick neck, broad shoulders, and tree trunks as thighs. At one point in our boisterous conversation, Billy reached out for a pound, and as I served it back, my four knuckles rested against his first two. Big boy, that Billy.

We’re jawin’ on about whatnot and whatever when suddenly, Billy’s right leg swings up swiftly, his knee level to my chest, and I, out of instinct, hop back into a fight stance and lift my arms to block what seems to be a right knee to my face.

Billy doesn’t break a beat in his story as the battering ram is returned to a relaxed pose. I’m now in fight mode, but not sure why.

“Nervous twitch?? Billy, I thought you were gonna knee me in the face!”

I relax my balled fists and loosen my stance. I exhale deeply, hoping I didn’t leak out too much adrenaline. “Billy, I was gonna hit you.”

Billy slumps his shoulders and closes his eyes. “It’s okay. You can hit me.” He straightens his spine, rests his hands on his thighs, and just waits, in a knowing fashion, in a this-happens-all-the-time fashion. I’m bewildered. He doesn’t move. “Go ahead, hit me.”

Flummoxed, I look to his brethren at his right, who says, “That’s just Billy.”

Billy awaits his bludgeoning, a willing receptor for my left hook. And I thought I was insane!

“Billy,” I place a soft hand on his left shoulder, encouraging his eyes to open and look at me, “I don’t want to strike you, Billy.”

“Thank you for the invitation, but no, I don’t want to hit you.”

Billy shifts in his seat, back into his relaxed pose, and offers sweetly, “But just so you know, if you wanna hit me, you can hit me.”

I am simultaneously touched and freaked out by his gentlemanly invitation for assault. I sit back down, where the girls are talking, and continue eating sushi.