I started wearing dark shadow after this movie. It works.

Naturally, every good cook is a good murderer. 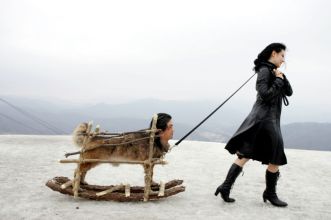 My dreams can get this wild too.

Three years ago, I discovered and fell in love with Chan Wook Park. Not familiar? He’s the director of Oldboy, Mr. Vengeance, and Lady Vengeance, a powerful revenge trilogy that I find, alongside many other movie fans, exemplifies the consummate redemption tale. Yes, I’m including Tarantino’s Kill Bill volumes, and you guys know how much I love Kill Bill.

Imagine my elation when I noted my Netflix queue was repopulated with Lady Vengeance! Hit A then A again on the Xbox controller aaand…

Love this movie. Gorgeously shot, beautiful sets, Vivaldi stitched into the operatic story, with a flash presentation that offered me several moments of, wow, I wasn’t ready for that! Here’s a director after my heart: he celebrates friendships and femininity amongst the criminally dispositioned as well as mocks the sensationalism of religion and the superficiality of broadcast media.

Powerful scenes abound in this movie, and they could only be conveyed by the strength of all the actors; I mean, everyone was invested in the wickedness of his or her role. The one scene where Geum-Ja is alone, smoking in the salon chair and laughing mad gave me an ohhh I’ve been there moment. There’s another scene with a dog licking the barrel of a gun, which forces you to wander into your dark self and confirm your position on the matter. And Jenny, oh boy. Jenny is SO the daughter I’d have if I’d let men make decisions for me. Not gonna get all meta about Lady Vengeance or the rest of the trilogy; I’m sure there’s plenty of blogs that have covered it all ad nauseum. I’m sharing with you why it matters to me.

Like any good artist, if you’re gonna approach a medium or a technique you’re not familiar with, you gotta study the masters. When I happened across Chan’s work, I was studying contemporary writing techniques, particularly this avant garde styling called “flash fiction.”  Chan Wook-park helped style my work to relay intensity with grace. I applied it to my schooling, and the results, along with some nods to Chan, you’ll find in I Blew Up Juarez.

So are you for or against revenge? I now find revenge to be futile. It is a projection of righteousness and the dominion of absolutists who believe in Right and Wrong. Revenge is an aspect of emotion, and emotion is ruled by Ego. I strive to be ruled by Logic.

Have you executed revenge? Many moons ago and during the time when my ego defined my existence. Along with my art studies I picked up the works of Sun Tzu, Confucius and the Baghavad-Gita, and honed my living philosophy to attenuate the rationale for revenge. Now I find it ephemeral, pleasing only to the ego, like a one-night stand or the last cigarette in your pack. Once it’s done it’s done and you’re left empty and wanting, so why bother?

However, I understand revenge. I sympathize with those who have also committed revenge. Artistically, I absolutely plan to exact a revenge tale in the other Johnny books. I can’t deny how enjoyable a solidly executed redemption tale is to read or watch.

Seonsaeng Chan, if you’re looking for someone to join your writing team, I humbly seek your consideration. Gamsa habnida!! 🙂