Continuing on flaunting my ChickBro status this week, with a dash of celebrating Women’s History Month, I’m gonna share one of my favorite sports memories. 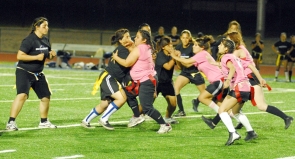 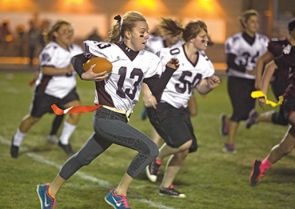 I had been chomping at my bit for this since Freshman Initiation. The MAHS Seniors put up a grand advance, but we 8th graders going on to 9th grade returned with an offense that would’ve made General Douglas MacArthur proud! And amongst shrapnel of shaving foam and egg shells, I distinctly recall a CERTAIN Senior doing the two-eyes-pointing-at-her-then-at-me thing as she and the other defeated cleared the battlefield.

It’s Powder Puff time. Freshmen vs. Seniors. And she and I are both on the field. 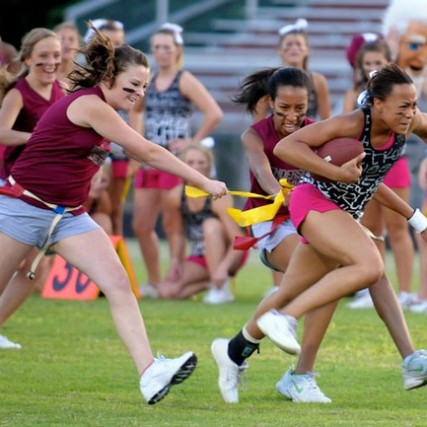 Coach serving as referee circled us freshman to one side, seniors to the other. “This is flag football, ladies. No touching, no tackling.”

Eyes shot lasers across the demarcated center field line. Clearly none of us heard that.

Coach drags his hand across his chest. “No hitting the letters on your chests.” Clever way to say, ‘no tit punches’, Coach. Snarls exchanged across the line. Clearly none of us heard that.

“Seniors, take it easy on the smaller women.” Coach had a right to declare that. Most of the Senior class of 1992 were Pacific Islanders. I’m not saying they’re big. I’m saying. They are BIIIIG WOMEN. I was rocking a buck fiddy myself those days, so I can comment thusly.

“Alright, let’s have some fun out there!” We clap in unison to break, and take to field position.

I, having just tried out for cheerleading (making base of course) and tried out for volleyball, of which the Islanders ruled, I was ready to show them these thick thighs in motion. I squatted down to join the freshmen offense, ready to guard my QB, and I watch as Ol’ Revenger, at the last minute, switch places with the senior in front of me. She gives me that nod, that ‘payback’s a bitch’ nod.

Play is called, I lurch up and forward from my squat with my arms crossed, elbows out. She’s meeting me with the same ram. And, SMASH! The girl runs right over me.

Flat on my back. 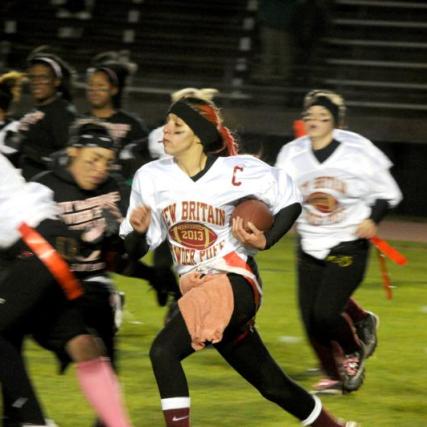 The play continues without me. Seniors are cheering, so I guess it was an incomplete. I pop back up, get ready for the next play action. The seniors are talkin’ mad shit, but I’m just smiling. I ache, but it’s a good ache. We set along the line of scrimmage. “You ain’t scared?” she half mocks/half compliments across from me. She was one of the volleyball tryout judges. She scored me for JV, ideally to be my team captain.

Play is called. I’m having the time of my life. Lots of whisteblowing from coach, because we didn’t catch the part where we couldn’t knock, punch, pinch, smack, squeeze to get to the flag. We’re soldiers’ kids, whaddya expect?

My father got his PCS orders, so we ended up moving to America after freshman year. But man, did I enjoy playing football! Title IX, while in effect, must’ve not hit Texas yet, so I couldn’t try out for high school football, but I TOTALLY would have, and I totally would’ve stuck with lineman.

I’m happy that school girls participate in and excel at high school football, and many female professional athletes are condoning high school athletics as a form of empowerment. While I missed out on continuing my love for playing football, I will continue to support young women in all sports.

One thought on “That One Time I Played Football”