We, Gina and I, had it in our heads we’d spend the afternoon at the Tampa IKEA. But that just didn’t happen.

We couldn’t stop talking about the thrift store.

It started so innocently. I needed to get new shoes on the Cool Whip. She needed to see if a certain top was available at Victoria’s Secret. Both were available off of Tyrone Blvd.

So off we went, dropped Cool Whip off to be shod, and to while the wait I says, ‘Hey, there’s a thrift store right across the way,” in response to her comment she wanted a better office chair for our office.

It so happened that particular thrift shop was going to close temporarily, so they were doing a fill-a-bag for $3.00. Lemme do that pheonetically: dey was doin’ a fill-a-bag fo tree dollah. I says, bet!

If you’ve never experienced the adventure of robbing somebody, the next best thing is to do a thrift store fill-a-bag. The goal of such an operation is to be able to put as many things in one bag, able to close the handle, and exit successfully with acquired things. And this is the standard market plastic bag, no tote bag or lawn bag, no. The bag that floats around in the street, the one you use to pick up your dog’s poop. Everything $3.00.

We had one main room and three side rooms to work. The cabinet was sold, but the jewelry in it hadn’t been, and ya’ll who’ve seen me stylized know how I commit to costume jewelry. So I sat there, took small basket after basket and offloaded into my bag. The thrift store manager, Debbie, made a face to indicate, ‘Leave some for others.’ Nah. I’m straight Viking right now. What’s mine is mine.

Gina found a nutcracker. You have no idea what kind of search that had been for her since she moved to the coast. So that just fueled her quest. More 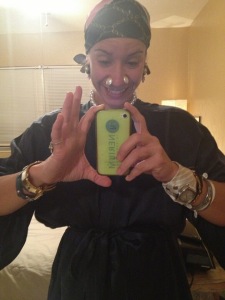 kitchenware, a fish-bird sculpture, a paintball mask, a weight scale, Pictionary, Scattegories, crystal dishes, a queen-sized duvet. You’re thinking, ‘she didn’t get that in one bag.’ Oh yes, Gina DID. 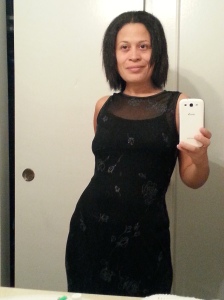 I went to work on outfits. How did a cozy pair of brown ranch boots just end up in the corner? Mine. Oh look, silk scarves from Italy. Mine. Cropped T-shirts that would make Miley Cyrus jealous. Mine. And since the rules were, the handles have to be able to touch, I started stuffing clothes in my kitchenware! A pot I picked up specifically for ramen doubled as a house for an evening gown.

They didn’t say the stuff on the wall was game, but I didn’t feel the need to ask either. So a poster of Daniel Craig as 007 has now been relocated to the opposite wall of my bed. Because…yeah. I also picked up a full dinner setting of steak knives, and some kind of knife that doubles as a manual chain saw. I’ll put that one behind my pillow. 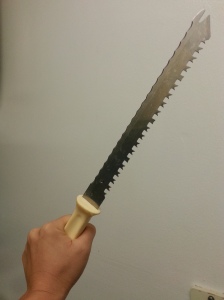 We brought our haul to the counter, and I cashed out with $2 left. It was 3:54pm, so I recommended we celebrate by going to our spot on the beach and watching the sunset, because…at 4pm, they start the 99 cent beer until sunset special! This is why I have a degree in economic development, people.

But it gets better! We get to our spot, see our people, and our bartender says, ‘this round’s on me.’ To which, we got nice and toasty as the sun settled to the West.

We broke into a house afterwards, but that’s another blog for another day.