The author has way too much to smile about these days. 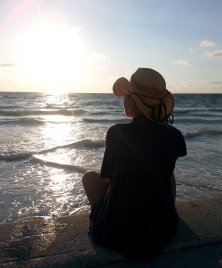 What a gorgeous day! Do you feel that breeze? Mmm, smell that salty Gulf water. Isn’t life grand?

Of course it is. Which makes writing action sequences with intense hate-fueled violence increasingly difficult. I mean really, how can I describe the bones in one’s face crumbling when I have this brilliant gold sunshine bursting over my shoulder?

Been thinking a lot about gratitude lately. I’m grateful that I can have such a dilemma as my creative one. It’s all unicorns and rainbows for me, now almost two years living on the Gulf coast, embodying the Salt Life as my own. It wasn’t too long ago that my mind, spirit and body were riddled with uncertainty. That era, thankfully, an unfamiliar place now. Although Bobby T recently reminded me what that place was like.

Bob and I enjoy three constitutionals a day, on average. A couple of evenings ago, he signaled walk time with a strategic bump of my hand off of my wireless keyboard. I strapped on his harness and we headed down to the lake. At the foot of the tree to our left, Bobby pounced on what I figured was yet another anole. He lifted his paw and revealed a very disoriented, very LARGE cicada. He motioned as if he was going to leave it alone, but it buzzed its wings, which signaled Bobby to suck it up in his mouth. Eww! was my immediate reaction. But then again, dogs be dogs.

I would say we got midpoint along the path by the lake when Bobby T made a customary stop. Instead of lifting his leg, he opened his mouth and released the cicada, very much alive and disturbed at this point. I ordered Bobby to leave it, and he did, but the cicada messed up. It defiantly buzzed its wings. Which made Bobby circle back and inhale it once more.

We arrive at the end point where I usually double back to the house, and Bobby made one more stop. He spat out the cicada. This time I pulled Bobby away from it so it could flit off. But it was too late. The fight in the bug was no more.

“Bobby! You treated that bug like a plaything. Holding it in your mouth just because you could. You’re a torturer, a bully! Where did you learn that kind of oh okay I get it now.”

The errors of my past played out in front of me by my own dog. He didn’t even know me then. I took it as a sign from the Universe, a quiet reminder of the person I allowed myself to be, who I was conditioned to believe was acceptable, who earned a reputation for disturbing and disorienting.

Grateful. Grateful that it is all rainbows and unicorns and black dogs with an eerie knack for interpretive philosophy.

5 thoughts on “Today, Be Grateful”